Je Veux Voir and the State of the Frame

In Je Veux Voir, Joana Hadjithomas and Khalil Joreige ask, ‘Given the Violence of the 2006 war, in the face of the spectacular images on television, what kind of images can we still produce? What can cinema do? What can be done to express the pain, speak of the victims, bear witness?’ (A Conversation with Dominiqe Abensour, Etel Adnan, Rabih Mroué, Jalal Toufic, Anton Vidokle, 2013)’. The use of fiction traversing through narrative and documentary, works as a catalyst in Hadjithomas’ and Joreige’s works. The point at which fiction breaks down, or attempts to break the real is the point at which latency surfaces in the midst of fissures between documentary and fiction.

Hadjithomas and Joreige take as a starting the point the act of seeing. When Deneuve says, ‘Je Veux Voir’ the impossibility of seeing/experiencing the aftermath of a war becomes an act of spectatorship of historical narratives. That sentence echoes another film, Alain Resnais’ Hiroshima, Mon Amour, whose first words, are ‘You saw nothing in Hiroshima. Nothing.’ In reply to which the film’s protagonist, an actress (Emmanuelle Riva) shooting a ‘peace film’ in Hiroshima replies, ‘I saw everything’. Resnais counters her claim with documentary images of the presentation of what Resnais terms as, the cradle of anxiety: Hiroshima as a place, and as symbolic of an act that is spoken of as symbol of the cost of war/peace, exhibitions and the rewriting of history – Hiroshima as a symbol where the lessons of peace are to be learnt. Riva’s character says, ‘How could I have not seen it…I have been to the museum four times. I saw the reconstructions, the photographs…I saw the newsreels’. Deneuve seems to answer Riva by responding to Rabih Mroué’s question, ‘Why do you want to go to South Lebanon?’ She replies, ‘because I am so close…I feel is impossible to stay on the fringe…I want to…I wanted to see…You know, we only saw images on TV. It always seems…it always seems unreal…’

Hiroshima, Mon Amour, is echoed in various ways in Je Veux Voir, not only in the act of seeing, or of historicizing but also as a state of forgetting that is tied to the image. While Hiroshima, Mon Amour tackles this through two fictional characters who begin and end with the end of the film, and starts at a point where remembrance and memory is institutionalized or historicized through the making/presenting of evidence as artifact or object as presented image, Je Veux Voir, through Deneuve and Mroué (as their fictional and real selves) activate remembrance and forgetting and question historical narratives while the camera follows and watches, until it cannot. 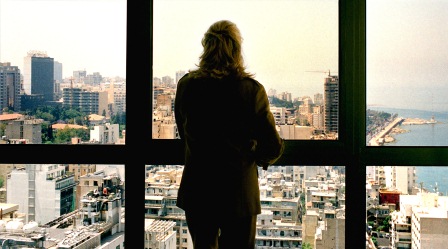 At the beginning, when Catherine Deneuve turns to her right and says, ‘Je Veux Voir’, the frame snaps into place, as a construct – the point when fiction is the frame – the symbolic Deneuve is framed as a symbol. Further on, when Mroué and Deneuve walk down a street in the suburbs of Beirut, the camera is stopped – they cannot film certain parts of Beirut or some of the destruction in Beirut – the camera switches off and the frame that was previously in place, opens slightly to make room for a denial of the symbolic (the image as symbol, the camera, and the actors) – where  the symbolic is also made the real – and consequently the image is denied, the recording of the image is denied, while allowing the consequences of the restrictions on filming to impact the frame.

Employing a linear structure, but constructing a narrative, interrupted and embraced by the movement between fiction and documentary, Je Veux Voir continues to excavate moments where re-visitation and reenactment play with the cinematic language in such a way that the language i collapses. After Mroué and Deneuve return from a visit to Mroué’s grandmother’s village, where amid the ruins they search for the house and a road leading to it – now destroyed – the sense of unreality – of Catherine Deneuve watching Rabih Mroué in his search, suggests the complexity of return. At the same time the frame constructed thus far, shifts ever so slightly in response to the shifts of the characters Deneuve and Mroué to make room for the individual/personal (vs. the fictional versions) to enter the frame.  Mroué says, ‘I don’t know where the house is. I spent my childhood here. I can’t recognize anything’.

As they drive away, the camera focuses on the faces of Mroué and Deneuve filmed through the windshield, and while the viewer and the camera watches, the image is taken over by an enveloping white glare which fills the screen. This is the point at which cinematic language breaks down, the point at which fiction and documentary collide and language is momentarily silenced. To allow for the collapse of the cinematic language is to allow for the shift in the state of images, which is to allow them to remain latent, however momentarily. The image in this regard doesn’t collapse but enters into a state of latency because it has lost the means to view itself, and so it remains for the viewer/catalyst to activate those images. It neither signals the start of forgetting, nor does it signal memory, which is itself a form of distance. Rather this breakdown signifies the point at which images become ineffective or change their state (from an active state to a latent state), it is a collapse of the cinematic language as it relates to the narrative, as it relates to the marking of time – it is the space between seconds so to speak, where latency emerges.

But which image are we referring to? Rather we refer to a series of images (as well as a set of images) and their interpretations; The image of a ruined village, the image of Mroué realizing that his memory of his childhood while still available to him, is now layered by the ruins of the place of its relation (interpretation), our image and the constructed image of Deneuve, the French film icon, looking at the ruins of Mroué’s village and the long shot/image of Deneuve and Mroué (dislocated and suspended between fiction and reality) as they are or be after their viewing ( this last image does not include the viewer’s perspective or interpretation, keeping the frame intact momentary).The longer the viewer stays in the last shot/image or is allowed to, before the screen is taken over by white, the more space is made in the frame for the viewer to insert themselves or their interpretation into that frame. Of these set/series of images, the possibility of return on part of the viewer ends with the movement of the last image into a state of latency.  Which is followed by a black screen, which suggests a denial or refusal. The point at which image loses the frame or tools through which it views itself is also the point at which it enters into a state of latency (this is my claim, and the point of activation for me as a viewer and writer, and one of many ways through which image enters a state of latency) until it is activated by the process of viewing.

Concurrently this is the point in this essay where the relation between  Je Veux Voir,  it’s textual and conceptual construct (internal and external) begins to shift from a passive state (writer as a viewer) into an active state (as participant viewer/ writer in the construction of seeing from the outside – of formalizing an outside perspective) which process then ends and the text and its perspective returns to latency, and as viewer and writer I come to two points where textual language breaks down in the process of recording a perspective- at the point where Deneuve and Mroué stand at the Israeli – Lebanon border, while Hadjithomas and Joreige and the rest of the crew are framed as witness , and when Deneuve returns to enact Deneuve the actress at the gala at the end of the film. At the end of this text any activation of the previous state of active participation becomes impossible to return to, made impossible by repeated viewings.

In the context of this issue, Je Veux Voir also records the process of marking and makes a mark on its subjects, of the process of seeing. Not only are the subjects destabilized as they pass through and into the real, as symbols and as real individuals, and not only does this leave a mark on the symbolic and the real, but the act of seeing is itself a mark, and more pertinent perhaps the act of walking onto the dirt road at the border –  the permissions it entails, that were no doubt recorded, and the changes in the frame – constitute a continual marking, which includes the unseen (the street that cannot be filmed, the jets that cannot be seen but create the desired effect by their passing boom, the landmines that have not been cleared). In this context, not only are the actors, the individuals marked, but so is the act of seeing, and the frame is marked – it is opened, reconstituted and closed and each iteration of change is recorded ( viewed as a series of stills), and at the very end, when the screen turns to blinding white, opened again.

The frame is constructed here as multi-layered and multi-structured, where openings and closing are tied to the position of viewing as well as to the individuals viewing (Mroué and Deneuve, and the camera), but also cannot (as the images respond to the movement between fictional and real) be envisioned as only a linear single frame, but rather as pieces of several frames, with gaps, laid one on top of the next, and viewed laterally, so that it forms a sculptural form. Consequently the act of viewing, is reconstituted in terms of the frame of viewing (Axis: position, perspective, lens), in conjunction with the several points at which fiction coalesces with the real (where the frame joins with another under or above it the presumed structural integrity of the frame thus envisioned is broken), which in turn interrupts the frame and expands its structure and destabilizes it. The negation of seeing (the gaps in the frames) is in equal parts, part of the structure and the construction/recording of it, as are the subjects of viewing.

The film constructs a complicated complex, layered, frame like a sculptural recording, and allows its viewers to construct this sculptural frame for themselves through the state of latency incurred by the images. The act of viewing and the construction of this frame, frames the geopolitical as image while embedding its consequences, and its interactions in the frame. The geopolitical is not only seen, but its own negation of the images also forms an archive of what cannot be seen, or is not recorded. The point at which Mroué and Deneuve stand at crater’s edge is an indication of what an image does not include, or cannot include – and ultimately the frame includes this exclusion and acknowledges it explicitly, by filming the crew with Hadjithomas and Joreige watching Mroué and Deneuve.

The sculptural construction of the frame – the movement between fiction/documentary, the characters and the individuals, the process of seeing on part of the subjects as well as the object (camera), the collapse of the image, frame and language at several points, the end of the frame at the border with Israel, the unseen but heard presence of Israeli jets and the distance enacted when Deneuve enters the reception visibly disconcerted and lastly the opening of spaces for viewers to enter – echo and mirrors the physical construction, reconstruction in Beirut and constitution of history as it relates to the city and Lebanon, and to the complexity of narratives of postwar image making.